Zoo History: The Halls of Montezuma

"The discovery of the American bison, as first made by Europeans, occured in the menagerie of a heathen king... With a degree of enterprise that marked him as an enlightened monarch, Montezuma maintained... a well-appointed menagerie."

~ William T. Hornaday, The Extermination of the American Bison

The Philadelphia Zoo often goes under the moniker of America’s First Zoo.  It is not.  The title is sometimes contested by the Lincoln Park Zoo in Chicago and the Central Park Zoo in New York, but neither of those is the oldest, either.  The Central Park Zoo bought the Halifax Zoo, which was opened in 1847, but that wasn’t the oldest American zoo either.  Not by a long shot…

When Hernando Cortes and his conquistadores entered the Aztec capital of Tenochtitlan in 1519, the expected – and encountered – many wonders, from towering pyramids to treasures of gold and silver.  They also encountered a zoo.  A big one.  A very big one, actually.  It made such a tremendous impression on the Spanish treasure-seekers that, when writing their accounts, many members of the expedition wrote more about the zoo than they did about any other aspect of the city.

Montezuma’s zoo would have been the envy of any European ruler of the era – the collection was so vast that 300 keepers were required to care for the beasts.  Over five hundred turkeys were needed daily to feed the animals, especially the eagles and hawks; of the two buildings in the zoo, one was devoted to the birds of prey.  The mammalian carnivores, in contrast, were fed daintier treats – portions of the carcasses of human sacrifices (of which there were no shortage of) were fed to the big cats. Twenty ponds – ten freshwater, ten saltwater (!?!) – housed fish and aquatic birds.  The menagerie also contained a section of “different” people (dwarves, the deformed, etc), a trend which has been seen throughout history and around the world.

What kinds of animals lived in the Aztec zoo?  It’s hard to say for sure, given that the only written accounts we have of it are of the Spaniards who, being strangers to the New World, were unfamiliar with the animals housed there.  We can probably infer that the lions and tigers that Cortes saw were pumas and jaguars.  We have descriptions of bears, monkeys, sloths, wolves, and armadillos, as well as aviaries of brightly colored birds, the plumage of which would later adorn Aztec robes.  Reptiles were also abundant, including turtles, crocodilians, and one uniquely American addition to the bestiary:

“They also have in that cursed house many vipers and poisonous snakes which carry on their tails things that sound like bells.  These are the worst vipers of all, and they keep them in jars and great pottery vessels with many feathers and there they lay their eggs and rear their young.” (del Castillo).

Rattlesnakes (which don’t lay eggs, by the way) weren’t the only American legend that the Spanish met in Tenochtitlan.   In another enclosure, the visitors encountered a “Mexican bull”, described as the greatest rarity in the collection:

“It has crooked Shoulders, with a Bunch on its Back like a Camel; its Flanks dry, its Tail large, and its Neck cover’d with Hair like a Lion.  It is cloven footed, its Head armed like that  of a Bull, which it resembles in Fierceness, with no less strength and Agility.” – De Solis (from Hornaday)

This was to prove to be the first encounter between Europeans and the American bison… a relationship which did not work out terribly well for the later.

In many ways, Montezuma’s zoo seemed superior to those of Europe both in its completeness, its quality of animal care (many of the species bred there, according to the Spaniards), and its innovation (how do you capture and transport bison and bears across a continent when your civilization hasn’t even invented the wheel?).  There was a lot that Europeans could have probably learned from the menagerie in Tenochtitlan (perhaps even animals that were there but have since gone extinct, never described by western science?), but it was not meant to be.  Two years later, Cortes attacked the city and destroyed it.  Before the city fell, many of its besieged citizens were forced to eat the animals from the menagerie.

Today, Mexico City has risen from the ashes of Tenochtitlan and is one of the largest cities in the world.  Like many great cities, it boasts an excellent zoo, featuring native and exotic animals from around the world.  Montezuma, it’s fair to guess, would have been delighted. 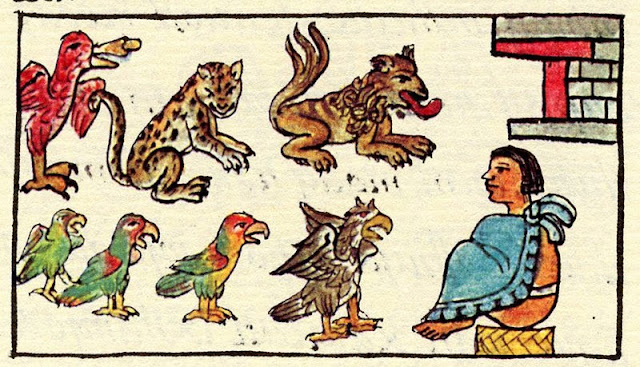 "The Ruler's Animals" from the Florentine Codex